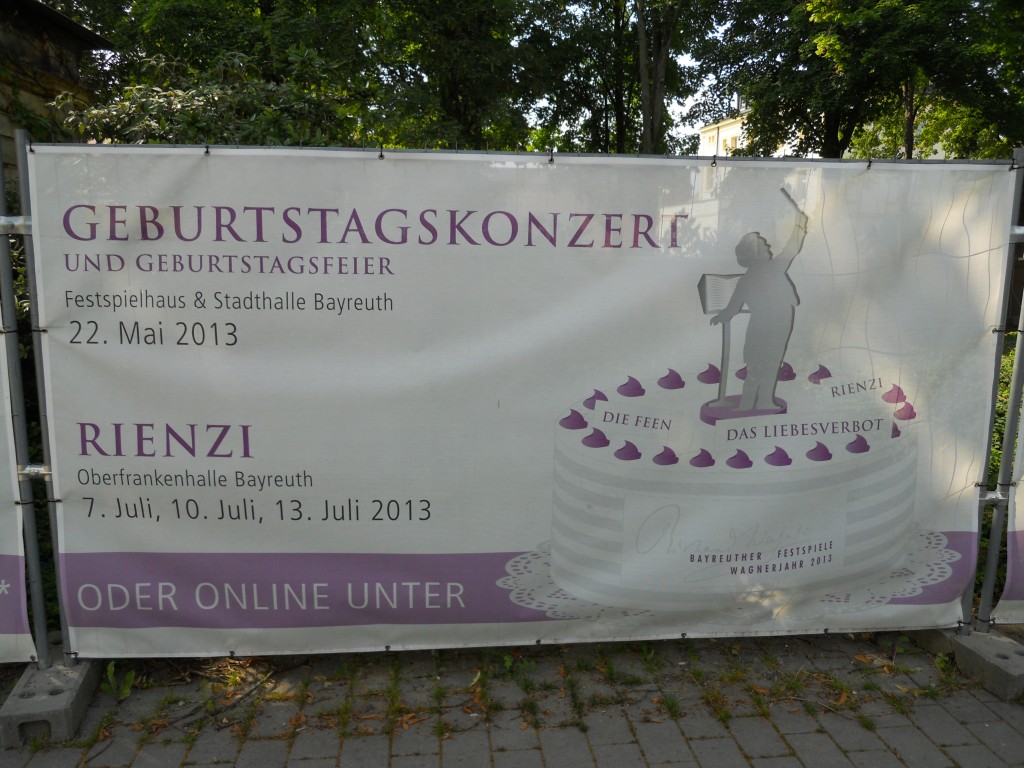 Under the heading “Better Late Than Never,” I figure it’s worthwhile to jot down a few thoughts on my seeing Wagner’s Rienzi in Bayreuth this past July. It’s something I’ve been meaning to do for months, but as the schedule got increasingly busier with work, teaching, and playing, the blog grew dormant. It’s not yet midnight/2014 EST, and it’s best to at least get this out during the same year as the performance…

Also, I feel compelled to at least mention it here because the performances seem to have came and went with little notice from the journalistic- and blogospheres. (A handful of reviews are here, here, and here, with a brief video from the Bayreuther Festspiele here.) I can somewhat understand the cold shoulder, unintentional or not: of the three orphans, Rienzi is perhaps the “most performed,” so particular attention was paid to performances of Die Feen and Das Liebesverbot. (But don’t let that fool you, Rienzi is rarely performed and gathers much dust.) And of course there was the Castorf Ring, which sucked much of the air out of the room at summer’s end…

The ban of the first three operas from the Festspielhaus remained in place during the bicentennial. However, as a compromise, they were performed down the road at Bayreuth’s Oberfrankenhalle: an arena that’s home to sporting events and pop concerts. (Bayreuth’s municipal opera house was closed for renovations.) Hence “guerrilla opera” – the experience of seeing any opera in such a venue would be memorable enough, let alone Rienzi in Bayreuth during the bicentennial celebrations. As regular readers know, I’ve attended many arena rock/pop shows, but never have I seen an operatic performance in such a venue. It provided an odd but unique backdrop to the occasion. 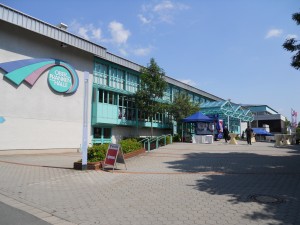 Because of July’s teaching schedule in Bregenz, Austria and August’s schedule back in MI, I was only able to make it to Bayreuth for two days and nights. After my train journey, I spent much of Saturday 07.06 wandering around Bayreuth on foot, including my venturing into town from my hotel, which was approximately an hour’s walk away. I of course paid my respects at Wahnfried and the Festspielhaus. I spent the first part of my Sunday catching up on work at the hotel before trekking to the Festspielhaus. (While there, I was unintentionally serenaded by the Leipzig Gewandhaus Orchestra, members of which were staying on my floor and loudly singing excerpts while hanging out.) Heading into town for the performance, I found the Oberfrankenhalle to be prepped for the operagoers who came from all over the world, including cloth tables for drinks beforehand and during intermission. An added twist for me was the fact that, while it was my second visit to Bayreuth, this was my first time attending a Wagner performance in the city. And while I have yet to see a performance in the Festspielhaus, this was technically my first festival concert (since it was a co-production). (But considering I’m only 30 and live in the US, there’s still much time to get inside.) 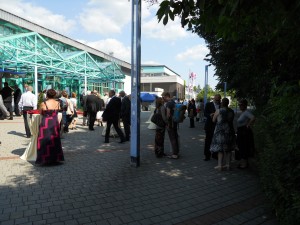 The juxtapositions continued into the arena. Throughout the concourse formalwear abound, and merchandise stands sold official Bayreuth Festspielhaus goodies including clothing, CDs, DVDs, programs, and books. A very different scene than, for example, Rage Against the Machine at the Palace of Auburn Hills.

Once I took my seat – pricey, but near the back – the transformation/juxtaposition continued. Tiered seating filled the arena floor to provide the “illusion” of the theater, as well as a specially-designed stage and set design and and makeshift orchestra pit. Worlds had definitely collided to realize this performance:

The co-productions of the first three operas were joint ventures by the Bayreuther Festspiele and Oper Liepzig, the latter city being Wagner’s birthplace. At the podium was Bayreuth staple and renowned Wagnerian Christian Thielemann, leading the Leipzig Gewandhaus Orchestra and Oper Leizpzig Chorus in a solid and often moving performance. Because of the venue, there were understandable limits to the staging, but Matthias von Stegmann‘s production was often effective, all things considered. It was a mix of old and new. While not a historic production by any means, allusions to ancient Rome were peppered throughout. As you can see from my (snuck) photograph above, coliseum arches were a mainstay for much of the production, often trading place with a tree and another pillared platform that occasionally doubled as a church. One effect – mostly effective but occasionally head-scratching – was the use of image and video projection. There were occasionally militaristic videos and images to complement the militaristic themes of ancient Rome (and/or other militaristic powers and societies). However, there was one image that appeared a few times that looked to be a visual continuation of either the bleachers or the “inner working” of the arena. Was it supposed to give on the illusion that the arena – and therefore the audience – was part of the story? Hard to tell, but it nonetheless made an impression, if only a confused one. The wardrobe choices were a mix of austere, leather-clad designer-wear for the militaristic and political figures, and pastel outfits for the townspeople who looked more at home in the Hamptons than ancient Rome. A nice visual cue throughout, however.

With it being almost six months later, some of the musical nuances are fuzzy in my mind. But certain aspects definitely stuck out and still remain clear:
• The chorus was lovely. They shined throughout, but particular highlights were the end of Act I and beginning of Act II. A very nice blend, especially considering the sporting complex’s acoustics.
• Mezzo-soprano Daniela Sindram as Adriano. Hers was the single role that musically stole the show. She was impeccable, emotive, and forceful.
• Tenor Robert Dean Smith as Rienzi and soprano Jennifer Wilson as Irene were quite fine, though they didn’t stand above the rest like Ms. Sindram. Smith’s Rienzi was rather light and lyrical.
• Thielemann and the Leipzig Gewandhaus Orchestra received the biggest ovation, and deservedly so.

We were treated to an edited version of Rienzi, not the 5+-hr. behemoth. (Though, considering the arena seating, I think my back appreciated it.) It would have been nice to see the ballet, but there are a lot of “would haves.” It would’ve been neat to have seen it in the Festspielhaus, but oh well. I can say that I thoroughly enjoyed Rienzi at Oberfrankenhalle. However, I must admit that the simple fact that it was Rienzi in Bayreuth during the bicentennial helped. Would I see Die Zauberflöte at such a venue, etc.? Nope. All that aside, it was a fine performance and truly a unique experience – one that helped make this Wagnerian’s bicentennial a special one. Furthermore, considering all the hubbub around Castorf’s bicentennial Ring at Bayreuth just a few weeks later, perhaps I lucked out with my 2013 Bayreuth experience? (Though, admittedly, I would like to see that Castorf production in person for myself.)

Bicentennial or not, here’s to more Wagner in 2014. First up, details from Chicago Lyric Opera on 01.17 regarding their next Ring…