This past weekend was something special: three disparate sets by Dave Liebman over as many days and stages at the Detroit Jazz Festival. I mentioned my excitement in my last post, and the performances met and exceeded the hype. Not only was it three days of The Master, but each performance featured a group I hadn’t before seen live.

Saturday’s headliner at the JP Morgan Chase Main Stage was Saxophone Summit: Lieb, Joe Lovano, Ravi Coltrane, Billy Hart, Cecil McBee, and Phil Markowitz. This burnin’ 75-minute set consisted of four tunes from the group’s debut album Gathering of Spirits: “Alexander the Great,” “The 12th Man,” “Tricycle,” and Trane’s “India.” After a bit of a loose start – mainly because of sound – it was off to the races with “Alexander the Great,” and the momentum let up not once. It may have just been the mix (i.e., balance) but it sounded as if the scoring was a bit different in parts. Either way I liked it. Cecil McBee’s dark bass lines gave the set a sinister undertone which I greatly enjoyed, and Jabali‘s driving yet unpredictable drumming continually propelled the group forward. And hats off to Phil Markowitz for such tasteful accompanying. He’s unafraid to both fill out the texture with dense harmonies and not play at all, and he knows exactly when to do both. “Tricycle” was perhaps the highlight, as each saxophonist got an opportunity to play in his own style – separate from the others – within the same piece. Lieb and Markowitz played a lovely improvised duo that could be transcribed and held up against most contemporary classical compositions; Lovano nimbly let loose over McBee and Hart’s drunken dance; Coltrane and Hart created an intense, fiery atmosphere reminiscent of the elder Trane and Elvin Jones. This led into Trane’s “India,” featuring Ravi on sopranino (with a great tone, something rarely heard on that instrument!), Lovano on tenor, and Lieb on soprano (and wood flute for the intro). Whatever was left of the metaphorical roof was decimated with Liebman’s final solo and Billy Hart’s drumming. 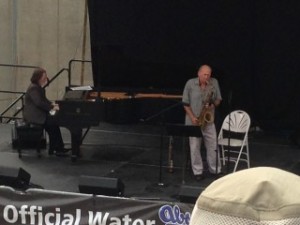 Sunday’s set at the Absopure Pyramid Stage was a duo performance by Lieb and longtime collaborator Richie Beirach. I was particularly excited for this concert because one of the first Liebman recordings I remember experiencing was Tribute to John Coltrane, which features a superb duo performance of “After the Rain” into “Naima.” (And, having purchased so many Lookout Farm, Quest, and other related recordings since then, I was ready to see the real deal in person.) They kicked off their hour set with a lovely tenor/piano rendition of “‘Round Midnight” that traveled quite a stylistic journey: a gentle ballad to bookend frenetic, chromatic solos, finished off with an exploratory cadenza. Liebman showed that, while he’s a Mt. Rushmore-level soprano saxophonist, he’s also dangerous on the tenor. Next was Beirach’s haunting “Testament,” followed by Wayne Shorter’s “Prince of Darkness” and an intense “Footprints.” Their duo rendition of “Footprints” was more intense than most versions I’ve heard by full groups, with Lieb’s characteristic soprano stylings and the pair’s ultra-chromatic approach in full flight. Closing out the set was Liebman’s “Tender” and the Quest classic “Pendulum.” The latter was a nice whetting of the audience’s appetite for the next day’s performance. 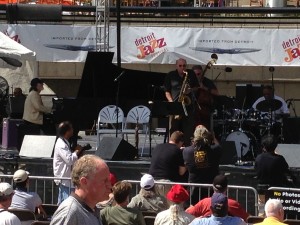 On Monday, Quest was featured at the Carhartt Ampitheater Stage, and it was a wonderful way to complete this triptych. Quest is a hard-charging acoustic quartet consisting of Liebman, Beirach, Billy Hart, and Ron McClure. Originally running from the early ’80s to ’91, Lieb exclusively played soprano with the group until the 2005 reunion. Living in Michigan, I thought I’d never be able to see this group without traveling to the east coast or overseas. (I’ve contemplated the former once or twice in the past.) Seeing them perform was a masterclass in ensemble communication. (The same could be said for the Lieb/Beirach duo and the now-defunct Dave Liebman Group.) Their musical empathy with one another allows for near telepathy, making the music unpredictable. They play without a safety net, and as a listener you know you’ll enjoy wherever they take you, even if it’s a complete mystery. They opened the set with a no-holds-barred “Pendulum” – their de facto theme – with Liebman on tenor. After the melody’s opening salvo, the group took off. Slowing things down a bit, next up was a treat for me: the Lookout Farm-era “M.D.” (Liebman). Of course, even Quest’s “slower” moments are rife with intensity, but they followed that up with a “Footprints” that took no prisoners – I thought his poor soprano would explode – and a “Re-Dial” that featured a complex collective improvisation. Beirach then demonstrated his command of both composition and improvisation on “Elm,” a beautiful ballad and now standard. (Or, rather, what best suits this quartet as a “ballad,” something still too strong for some listeners.) Much to my surprise, the group then played Ornette Coleman’s “Lonely Woman,” featuring Lieb playing the wooden flute exclusively. In my review of DLG’s Ornette Plus – is mine really the only review of that album? – I praised DLG’s ability to create an almost electronic soundscape. Well, Quest may have one-upped that rendition, as they created a complementary haunting atmosphere with Lieb at the helm but with acoustic instruments. No pulse, just flowing sound and texture. It was definitely a highlight of the weekend. They then concluded their set with a version Wayne Shorter’s “Paraphernalia” that made Circular Dreaming‘s studio cut seem tame. Each time Billy Hart played his fleeting rock rhythms, I’m sure Danny Carey and Vinnie Paul felt a tremor in The Force. I’m surprised the stage remained standing at the performance’s end.

Needless to say, it was an amazing weekend. (…and I didn’t even discuss the great performances by Charles Lloyd and John Scofield!) I know that Dave is often considered “a musician’s musician,” which he definitely is, but I’m confident that he garnered many new fans over the weekend at the world’s largest free jazz festival. The NEA Jazz Master consistently demonstrated to the Detroit audience why he deserves to be counted among the pantheon of the jazz greats.