(Disclaimer: I don’t intend for this to be a “review,” but rather a stream of consciousness way for me to gather and digest my immediate thoughts and reactions. Also note that I am not an EOTB expert. I’m simply a fan.) 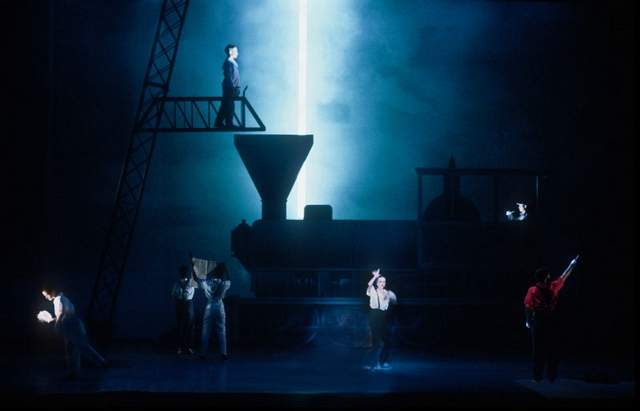 It was very fresh and clean.

This afternoon, I was fortunate enough to see Philip Glass and Robert Wilson’s mythic Einstein on the Beach. It’s been nearly a decade since I first learned about this work (and saw a clip) in Music History III, and since then seeing it performed live has been on my bucket list. I remember most of my classmates’ initial reaction upon first hearing of a 4.5-hr, intermission-less and plotless opera in which the only singing is that of solfege and numbers, along with senseless spoken text (not to mention modern choreography and stage design): “That’s cool.” Then we saw the video clip of “Trial/Jail” (AKA “The Supermarket Scene”), and many of the cheers turned to, “Eh, nevermind.” I, however, was one of the few converts, and have longed to see it since.

As you’ve likely seen online or elsewhere, Einstein is being revived this year and into 2013 by the originators – Philip Glass, Robert Wilson, Lucinda Childs – and Pomegranate Arts both in celebration of Glass’s 75th year and simply because they see this is being their last chance. It’s been 20 years since the last production and international tour, and, with one exception, the one before that was the very first in 1976. And while this tour will feature many international hotspots, including runs in Berkley, CA and New York City, the tech rehearsals, dress rehearsals, and “preview performances” occurred in Ann Arbor, MI (!) over the last month (with the preview performances this weekend). (The University Musical Society board should be given some sort of medal…)

I could give a blow-by-blow account of what I saw, but it’s not as if I saw a new storyline or interpretation. (After all, how could one effectively re-interpret something that has no plot?) Instead, I’d rather attempt to capture some of the feeling. I hadn’t been as excited for an individual concert/performance as I was for today’s Einstein in at least a couple years. Concerning classical/contemporary music, only my excitement for attending Chicago Lyric Opera’s 2005 Der Ring des Nibelungen compared. However, the main difference between the two is that I knew I would one day get to see a major company perform Wagner’s magnum opus; it was only a matter of time and resources. On the other hand, I chalked Einstein up to a pipe dream – something I’d only realize via DVD.

Well, today was the day, my friends. Not only did I see the opera, but as it was conceived and realized by the original creative forces, including the Michael Riesman-directed Philip Glass Ensemble. I sat through the 270-minute behemoth (minus a couple minutes for a quick dash to the restroom – did I mention there’s no intermission?), not once thinking Are we done yet?. Much of the time, to be honest, I wasn’t even on planet Earth to ask the question. I was in instead in Bern, Switzerland. And in a laboratory-cum-courtroom. And a jailhouse. And a prematurely air-conditioned supermarket. And a spaceship. And even a park bench. I lost myself in an endless barrage of numbers, syllables, and mind-boggling, repetitive text. While the music alone is quite something, the Gesamtkunstwerk is absolutely mind-altering. (Thank you, Alex Ross, for aptly noting, “It all goes back to Wagner.”) Between the trance-inducing music, the minimalist-but-still-a-three-maybe-six-ring-circus action, set designs, costumes, and props, every subtle nuance – from a quick wink to the tossing of a paper airplane – commanded attention. Some specific thoughts:

• I quite enjoyed the way in which the production started. Instead of the typical “light down, mouths shut” procedure, it was a gradual transition from the time the audience entered the theater until the entrance of the chorus.
• Kate Moran kept me on the edge of my seat with the supermarket text, never quite saying it the same way twice (despite repeating it for ~15 minutes…).
• I expected great things for the “walking bass” portion of the Spaceship scene. What I didn’t expect was to be overwhelmed. Definitely the climax.
•  After returning from my jaunt to the restroom three hours in, that’s when it really hit me that the cast and crew gets no break. (Yes, individuals may come and go, but the show continues nonetheless.) Hats off to them, especially the Philip Glass Ensemble’s soprano.
• There was much more subtle humor (as compared with the toothbrushing bit) than I had expected. It of course helped that the audience was so willing to dive in.
• I appreciated the narrators not always being prominent in the mix. It was particularly effective in “Knee Play 1.”
• The extended dance numbers left me exhausted when complete.
• Although I felt as if I roughly “got it” while I stood applauding afterward, whatever “it” was vanished in an instant. I still couldn’t tell you what it’s about. 🙂 Much like a dream, which is as clear and real as anything while it occurs, it’s a blur once awake. Unless you’ve seen it or know it well, my rambling descriptions would make little sense.
• While I won’t be so bold as to say I was a part of history, I can safely say that I witnessed history – at least artistic history – in the making this afternoon. And that was truly special. (Simply see the bottom of this page for a list of all its performances. Ever.)
• This was one of my most unique musical experiences.

I gave the full recording one final listen on Friday in an attempt to get myself in the right frame of mind, but nothing could have properly prepared me for what I witnessed this afternoon. I left the theater feeling many things: giddy, emotionally and mentally exhausted, thankful, awestruck, somewhat confused. One thing was for certain: I needed more time to digest what I had just experienced (and still do). I drove home in silence (one hour), and haven’t listened to anything since walking in the door. I just keep replaying hundreds of auditory and visual snapshots in my mind, most of which I’m sure I’ll remember forever. Fervently… 🙂