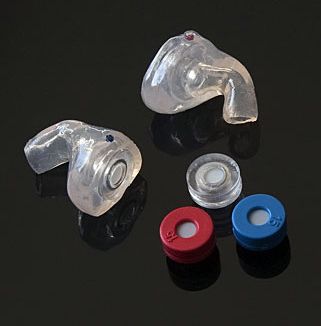 I stumbled upon this NPR article a few weeks ago and it’s since stuck in my craw. While I agree with one of the overall messages – it’s important to protect yourself in high-volume environments – I’m puzzled by the Bob Boilen’s seemingly surprised POV. I try not to get preachy about much, but earplugs and volume regularly lead me to filibuster. I know that I already have slight hearing loss in one ear, and I’ve waged an all-out preventative assault for the better part of the last decade.

Like the author, I regularly attend (and participate in) performances of varying kinds: clubs, large arenas, theaters, ampitheaters, museums, bars, etc. Some are quiet and cozy, others are deafening. When I’m preparing to leave the house to rehearse, perform, or attend a show, I always take a moment to assess the sonic environment I’m heading to, and almost never leave home without my earplugs (my own personal American Express). About 8 years ago I decided to spring for a pair of Etymotic custom-molded earplugs. It seemed a little much at first, but it turned out to be arguably the best $160ish I’ve spent.

Performing in loud ensembles was ~65% of my reason for the purchase, with the remaining ~35% stemming from my regular attendance of loud (mostly rock) concerts. Now, I do love many loud styles of music, but I tend to be extra cautious with the volume at which I listen to them. (My wife regularly snipes at me in the car or at home for having the music too low when listening.) I always enjoy listening to music (of course), but it should also be a comfortable experience. After all, if musicians and other audiophiles insist on investing in a great pair of headphones for private listening (I do love my Bose headphones), why not apply the same logic to earplugs and “public listening”? Similarly, consider bowling, an activity many Americans participate in occasionally. For most people, renting shoes and/or balls doesn’t really affect their enjoyment – they’re often there for reasons more social than sport. But for those with a love of the game who play frequently and with purpose, investing money in gear (ball, shoes, upkeep, etc.) is a no-brainer because it enhances the experience.

The big complaint about earplugs in general is that they distort the sound. True, $3 foam thimbles – like renting a bowling shoes for your ears – work slightly better than taping a pillow around one’s head. In that case, you get what you pay for. However that’s not at all the case when using earplugs that are actually meant for listening (as opposed to those meant to block out sound). I always tell people that wearing custom earplugs is the equivalent of simply turning down a volume knob on your ears. Everything comes through cleanly and as projected, only at a softer level. (Also, custom plugs come with adjustable filters for varying volumes.) In fact, I can often hear better with them in, as the natural distortion and fatigue is a non-issue.

I’ve seen many loud performances. (Korn & Staind touring with the Guinness-certified world’s loudest sound system, which was painfully loud even with foam earplugs, and Phil Anselmo‘s Down immediately come to mind.) The episode that most sticks out to me is my 8th TOOL concert (10.18.02). I eventually forced my way to the front row, but was located directly in front of one of the speaker stacks for a majority of the performance. I had a deeper-than-normal ear fatigue afterwards and was to see them again two nights later. In between, I attended a wedding and, seated near the DJ, I suffered a slight auditory meltdown at the reception. As a result, the 10.20 TOOL show was a turning point for me, as I’ve worn earlugs since and haven’t looked back. (Side note: My ears, mind, and body were much better off after that concert than the previous two nights.)

Granted, the Korn show I mentioned was a bit much, but for the most part some types of music just demand loud performance. Much of rock music is quite visceral and therefore physically engaging the audience is a factor – even when wearing earplugs, feeling the music’s vibrations run through your entire body at a live show is a truly wonderful feeling. But yes, there are many instances in which a band or venue is obnoxious (again see Korn), bordering on dangerous. (I’ve been on both the giving and receiving end of this.) It’s a situation in which everyone – performer, engineer, listener – should and does have skin in the game.

While I’ve written most of this article from the audience’s perspective, I should also note that my earplugs have done wonders for gigging this whole time – standing amidst drums and amplifiers takes its toll quickly and aggressively. But since the original NPR article stressed the audience perspective, I opted for that arena.

I could go on and on. Truly. But since I want people to return to this blog from time to time, suffice it to say that the listener ultimately shares responsibility in auditory comfort. 🙂 And, if done correctly, it doesn’t have to compromise the overall experience.