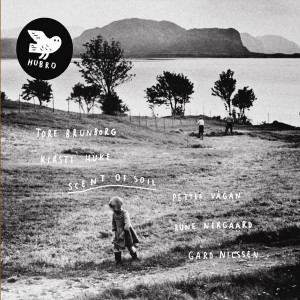 I’ve had Scent of Soil‘s self-titled album on repeat for the last week, and I don’t foresee that ending anytime soon. As is the case with most “New Listen” entries, this album is new for me but itself a couple years old. Shame on me for not finding it sooner. One of my initial thoughts during my maiden listen was: Where has this album been all my life?

Hyperbolic? Not by much. The band’s self-titled debut scratches me right where I itch. As mentioned in my last post, I was fortunate enough to meet and talk with Tore Brunborg after the recent Tord Gustavsen Quartet performance in Chicago. I’ve been quite a fan of Brunborg in particular for a few years now, following his work with various ECM artists as well as his work as a leader. Unfortunately, at the time of our meeting I hadn’t yet dug into Scent of Soil, his rock-meets-jazz hybrid project with vocalist Kirsti Huke. I corrected that a couple days later and remain under the album’s spell.

Scent of Soil is fusion in the truest sense of the word. This isn’t simply a rock album with sax and keys, or a jazz band playing straight eighths, but instead a quintet of top-shelf musicians synthesizing their various backgrounds and strengths to serve the music. It’s rare to hear such a balance between the rock and jazz (and more) aesthetics, especially when dealing with songs. In that regard, the band reminds me of the one and only Joni Mitchell. It’s not that they sound like Joni, but rather the spirit of what they’re doing is reminiscent of her. (Though songs such as “Trøndervise” have airs of The Hissing of Summer Lawns and Don Juan’s Reckless Daughter.) Given all that and my own dual-comfort in rock and jazz worlds, this album seems tailor-made for me. Granted I started out with an initial bias because of my fondness for Tore’s playing, but I love this album for reasons far nobler than any fanboy notions.

Scent of Soil are fronted by Brunborg and Huke, who both wrote the music and lyrics and also play keys on top of their primary instruments of saxophone and voice, respectively. Filling out the lineup are guitarist Petter Vågan, bassist Rune Nergaard, and drummer/percussionist Gard Nilssen. Though that may seem like a “Brunborg/Huke + band” arrangement, this is indeed a group effort, with the rhythm section creating not only a solid foundation but also a variety of textures and soundworlds in which the songs come alive. Petter Vågan’s electric, acoustic, and steel guitars provide much more than harmony and melody, but also walls of sound ranging from ambient to arena- and noise-rock. Nergaard and Nilssen are a strong yet tasteful rhythm section. Looking at the resumes of each of the musicians, one may expect the bass and drums to wander and showboat, but they both stick together and lay it down the grooves right where they belong: in the pocket. The music and lyrics for these nine selections are original, save for some adapted text for “Breeze” and “Necklaces” by Robert Frost and Emily Dickinson, respectively.

Musically, the album appears to be divided into three parts, each with three songs. “Breeze” begins the album beautifully. Flowing acoustic guitar arpeggios and vocals are supported by an ambient layer of bass and electric guitar. Eventually the full band kicks in to a dreamy half-time groove, continuing the ambience throughout, the layer of which is all that’s left standing once the drums, voice, and horn fade die away. This opening song is a warm bath drawing the listener in for a wondrous journey. Once lulled, a toe-tapping-but-calm groove from the drums and bass kick-start “Ocean,” with the electric guitar now providing a shimmering ambient layer for the rest of the rhythm section. With the hazy vocals and treated horns, It’s a groove finding its way through a fog, finding the clear halfway through. with Tore’s (and the album’s) first real solo, leading to danceable pop rock. Thought it builds some, the band saves their energy for, oddly enough, “Ease.” A ballad-esque 6/8 from the bass and drums is accompanied by muted, whale-like guitar bellows. During the second verse, this song builds as Tore begins to soar, giving way to a four-on-the-floor groove that really unleashes the band for the first time, including fast sax runs, high and fast guitar, and additional layers of keys and guitars. Coming full circle, the 6/8 returns at the climax, allowing the tension to gradually deflate.

“Necklaces” is an unexpected palette cleanser after the rock trajectory of the previous songs, beginning the more meditative second act. It features some lovely percussion work by Nilsson, including brushes and bowed cymbals. That, coupled with the mildly dissonant harmonic backdrop of bass, guitar, and keys, offer a haunting setting for Huke’s adaptation of Dickinson’s Summer Shower. “Trøndervise” is a wordless number in which Brunborg’s compositional and melodic skills shine through. His horn and Huke’s vocables float above the rhythm section’s staccato, almost tribal groove and Vågan’s acoustic work. “Floating” is another slow 6/8 number, though much more intense than “Ease” (and without the meter change). To use a recent reference from a few entries back, the slow intensity reminds me of the intro to Zwan’s “Mary Star of the Sea” – not a “rocking” tempo, but definitely a rocking intensity. (Gilsson’s not as manic as Chamberlin on the drums, but the overall vibe is there.)

“Bin” offers another reset of sorts, with light percussion and guitar harmonies and vocals (and eventually the full band) slowly building to a gently joyous ending. Just like Sisyphus, however, the crescendo gives way to the rhythmic but quiet guitar/sax ostinato that begins “Go Charm!” After about 90 seconds of light groove, the drums, guitar, and then bass introduce cacophony out of time, finally finding a pocket over which to let the band unleash their inner arena-rock stars circa 1995. Brunborg and Vågan battle it out before Huke returns to close the song. I want to don a pair of old Dr. Marten’s at the end of this number, and that’s a complement. The album then ends with the title track (which is also the name of the band, putting them in elite company alongside Black Sabbath). “Scent of Soil” is another slow burn that gradually builds upon itself, this time over an organic 7/4. Tore unleashes one final, full-throated solo before the final verse and the slowly-decompressing outro which fades into silence, gently bringing the whole work full circle.

Unintentionally, this turned out to be a much longer “New Listen” than the others, but this album is definitely worthy. A big reason for that is simply my enthusiasm for this great release. I also want to get this album in front of some more eyes and ears, as its little-known, at least here in the US. The band calls this “boundary-defying music,” and it’s most certainly that. Elements of rock (pop, indie, and otherwise), jazz, and more experimental elements combine to yield a compelling but accessible collection of original songs. Despite the partial jazz billing, the solos are limited defined, with the overall focus being the songs themselves. And the songs are great – catchy, musically interesting, and aging well through repeated listens. The whole is much greater than the sum of the parts here, and each of those parts offered a high bar to start with. Scent of Soil is a solid debut from a group I want to hear more of.