LeRoi Moore, Dave Matthews Band saxophonist and founding member, died five years ago today. He succumbed to complications from an ATV accident a few weeks shy of his 47th birthday. I’m sure there’ll be various remembrances throughout the DMB-centric corner of the internet, but I’d like to chip in my $0.02. It seems cliché but, although I never met the man, he and his music are with me each day. 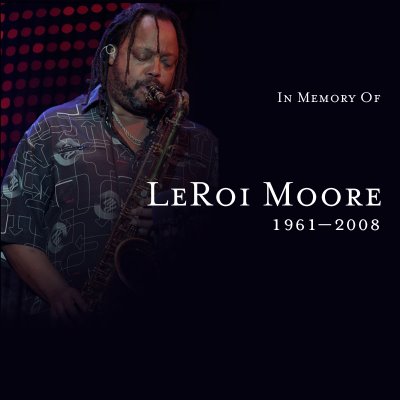 Regular reader of this blog know my deep love of DMB’s music. (See below.) Not only does he play a large role in a favorite band, but I count him among one of my favorite saxophonists. I always include his name if someone asks who my biggest saxophonic influences are. Roi can’t be written off just as “the sax player” a la Dick Parry. It’d be presumptuous to say that Roi single-handedly changed how a saxophone was perceived in rock and pop music, but it’s notable that he served as the band’s co-lead soloist (along with violinist Boyd Tinsley). Sure, he was no Trane or Liebman, but he didn’t set out to be, at least not with DMB. (And, conversely, I don’t see either of them playing in Roi’s style the way he did.) For me, his playing is a near perfect blend of jazz-influenced, soulful rock and pop. It’s not to be compared to strictly jazz saxophonists because it’s not jazz. It’s a different aesthetic. And although he was a working jazz musician before DMB, he grew into something much more. In fact, looking back, while I’ve often gone through spells in which I aspired to be the next young jazz lion, the truth is that my aim has often been more in Roi’s direction – to be a high quality, stylistically flexible musician.

Though I knew of the band beforehand, it all really began with my purchasing Crash soon after its April 1996 release. As a young adolescent playing the saxophone, I was floored to hear a pop/rock band featuring the saxophone so prominently, and not just in the radio singles. At the time I was only tangentially interested in jazz, and most saxophonic pop references were of the “guest feature” variety, generally in a honky R&B style: Pink Floyd’s various sax cameos, 50s and 60s rock, etc. (I touch upon this continuing trend here.) Without this becoming a Crash-centric post, that album proved to be a real turning point for me. Roi’s solo on the studio recording of #41 is perhaps the first instrumental solo I committed to memory. And not because I made a conscious effort to do so; rather, I just listened to it all of the time. (Imagine my delight when I attended my first DMB concert and the band opened with “#41.”)

I remember the shock of learning the news the night he died. I was with my girlfriend (now wife) and she put up with my impromptu memorial service which included moping on my couch, teary-eyed, watching the Listener Supported DVD with a picture of Roi on my laptop screen. We fans knew that he’d been in critical condition, as he’d not been on the tour since late June (with Jeff Coffin – another of my favorite saxophonists, completely separate from his DMB association – filling in, later to be his permanent replacement). I’d spent every summer – and occasional winters – seeing him and his bandmates in concert since 2000, and I’ve missed him at every show since that night. Sure, I still have my hundreds of hours of recordings, but it’s just not the same. The band has taken a slightly different direction with Coffin now playing full time. It’s not worse or better, just different. I absolutely love what they’re doing now, but I miss Roi.

I made my annual pilgrimage to the band’s three-night stint at The Gorge Ampitheatre ten days after his death and it was an emotional weekend. After canceling a couple of concerts for the funeral, the summer tour resumed as normal that weekend in Washington. Watching the band, particularly Carter, play through “Bartender,” the weekend’s opener, in tears was moving. (There were many tears throughout that weekend.) On that first night, the crowd launched into an impromptu tribute of cheers and glow sticks for Roi between songs partway through the set. The crew flashed a picture of Roi on the screens and Dave told the band and crew to hold off until the crowd had finished. It was a memorable six minutes before the band launched into a special “#41.” I’ll never forget it. For those that may have been there, and other fans who weren’t, here it is in two parts:

And the tribute video shown before the encore each night brought a tear every time:

I still listen to Roi all the time, but he’s been getting some extra attention over the last week as the five year mark approached. It really does seem like just the other day I was enjoying his playing on the first part of the 2008 tour in Chicago, Detroit, and Buffalo. But at least I can still enjoy the wealth of great music he left behind. And to cap off this humble tribute, here is perhaps my single favorite solo of his from an official release: the flute and saxophone solos from “#41” on 1999’s Listener Supported: